The Queen Elizabeth Hospital’s (QEH) new medical director Dr. Hussam Azzam is one of 18 new physicians who began – or will soon begin – practising on Prince Edward Island since January.

See more at The Guardian

The men who participated raised $7,523 for the YWCA's women's centre, which opened last December, and the top fundraiser was Dr. Hussam Azzam, who raised $1,601 followed by Rick Leger, who raised $500 and Darryl Sheppard, who raised $495.

Hundreds rally at the Forks to protest violence in Gaza

“Hussam Azzam carried his four-and-a-half-year-old son, A.K., on his shoulders for most of Saturday afternoon’s Rally for Gaza”

"The problem is that most people don’t understand the reality of what’s going on there. It’s unfortunate, but someone needs to tell the real story," Azzam said.

Men step out in style to oppose violence against women.

Dr Hussam Azzam wins the tird-place top fundraiser in the YWCA organized fourth-annual Walk a Mile in Her Shoes event in Thompson on Sept. 21st 2013

Pain Management Clinic in the Northern Health Region -  Manitoba, is the first of its kind outside the capital Winnipeg

"We continually are in conversation with additional specialists to expand the services we are providing," says Dr. Hussam Azzam, chief medical officer for the NHR, who first envisioned a northern pain clinic.

Dr. Hussam Azzam presents a cheque for $3,775.05 from the BRHA Northern Consultation Clinic Obstetrics Gynecology unit to the Ear, Nose and Throat Clinic.

Dr. Azzam is ready to take on a mile for a good cause. 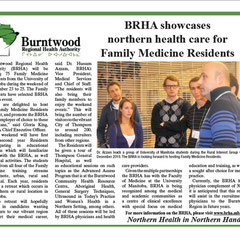 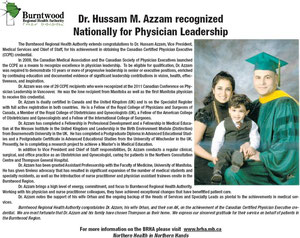 The Canadian Certified Physician Executive (CCPE) program is pleased to introduce the first receipents of its new physician leadership credential.